This post will be a quickie explaining mid-year discounting (a.k.a. mid-year convention). We introduced this concept in our DCF tutorial, but we’re going to fully explore / explain it below.

But why? Who cares?

So yeah… it’s important and useful.

Let’s review some background info (bare with me). DCF stands for Discounted Cash Flow analysis. It refers to the common valuation methodology of projecting an asset’s cash flows and then discounting those cash flows to present value. Theoretically, the asset’s value equals the sum of those discounted cash flows. So far so good? If not, this article might not be the right starting place for you.

R is the discount rate.

We know that over the next year (T = 1), RandomCo is projected to earn 100mm in cash. Furthermore, we can assume that RandomCo will be earning 8.5mm of cash each month.

Yet we’re discounting all of that cash as if it were earned at year end. This is unfairly punitive, especially for cash earned in the next few months.

Okay, let’s apply this to RandomCo:

We’re subtracting 0.5 from each time period, because we’re applying mid-year convention, and we’re treating the cash flows as if they are earned at the midpoint of each period (mid-year).

Mid-year discounting is not perfect, but in many cases, it captures economic reality better than period-end discounting.

Most discussions of mid-year discounting skip straight to Excel at this point. But there’s still some gold to extract.

Most bankers apply mid-year convention by default, and it’s generally a fair assumption: Many businesses earn cash semi-evenly throughout the year.

You should, however, think critically about the given business. How much seasonality does it have? For example, some specialty retailers do the bulk of their business at year end. For companies like these, mid-year convention is inappropriate - and period-end discounting is, in fact, better.

How much does mid-year convention really matter?

To answer this question, we’re going to return to our DCF template. Our template contains a switch (at the top) to turn on / off mid-year discounting. This switch will allow us to test the valuation impact of mid-year convention.

Our DCF template fully incorporates mid-year discounting, and you can review the template to examine formulas. If you have questions on specific formulas, check out our DCF article, which walks through the trickiest parts. If you still have questions after reading the article, please reach out.

Before getting into the numbers, we have a question to ponder: Under what conditions will mid-year convention have the largest valuation impact?

First off, by “valuation impact” we mean the difference in value between a DCF using period-end discounting and a DCF using mid-year convention.

Below is a comparison of enterprise values calculated using the perpetuity growth method - with and without mid-year discounting. We calculated these values using our DCF template and an Excel data table (I know, I know - we should have been classier and made our data table the right way). 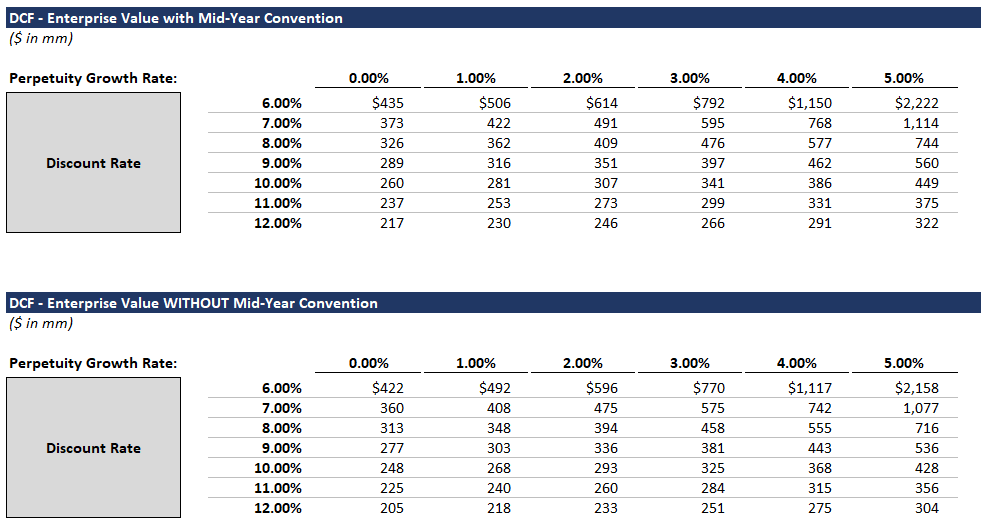 These enterprise values seem pretty similar, so let’s look at them on a percentage basis:

Remember it’s important to think critically about both explicit and implicit valuation assumptions.