This will be a quick post covering Payment-In-Kind (PIK) interest. PIK interest is a feature of some debt instruments that allows the interest expense to be accrued, rather than paid in cash, for a certain number of years. This is where the name payment-in-kind comes from - the interest expense on the debt is paid in kind, i.e., with more debt.

While rare today, PIK interest was relatively common during the run-up to the 2008 financial crisis, and therefore, it is often seen as a symptom of loose credit markets and boom times. Many prominent 2006 and 2007 private equity deals had debt instruments with PIK interest. Some of these deals did not go well.

Why Do We Care?

Why PIK Interest Is Appealing

PIK interest has entered the chat.

How do we model PIK interest?

So now we know what PIK interest is and why it’s theoretically useful. How do we model it?

We’re going to be referring to the completed Excel template from our intermediate LBO tutorial.

This template already has PIK interest functionality built in, and we’re going to be explaining the different components in detail. We’re going to focus exclusively on the LBO_Final tab. The other tabs are intermediate steps explained in the tutorial.

At the top of the LBO, you can see the financing assumptions, where we include a Years PIK column for each debt tranche. This column specifies the number of years of PIK interest.

We’re assuming the subordinated notes have a 3-year PIK. 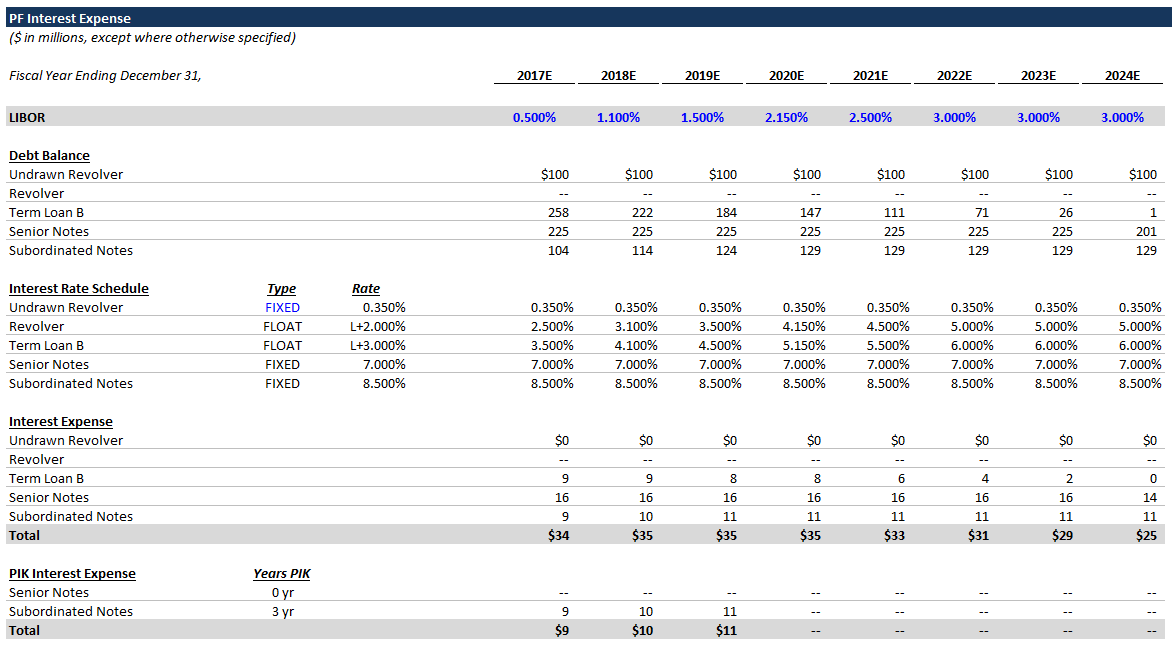 5. Include Noncash Interest Expense in Statement of Cashflows

Now you should understand what PIK interest is, why private equity professionals like it, and how to model it.

Any discussion of PIK interest, however, would be remiss if it didn’t address the risks.

PIK interest is very risky. PIK interest allows a company to increase its debt burden in the near-term and pay more interest expense later on. In order for this to work, the company must be able to delever and then service the increased cash interest expense when the PIK period expires.

Furthermore, because PIK interest is riskier and is often associated with more aggressive capital structures, debt tranches with PIK interest are often expensive. Going back to our capital structure first principles, if the cost of debt is greater than the ROA, the incremental debt will actually decrease the return to shareholders. To put this in concrete terms, if we examine some of the 2007-era private equity deals that featured PIK interest, the cost of debt (with PIK interest) was sometimes greater than 12%. During the financial crisis, the ROA for many of these companies dropped well below 12%. Therefore, even when the companies managed to service their debt burden, these notes were not accretive to shareholder value.

To put it simply, PIK interest is an extremely aggressive feature, where everything has to go right for the private equity investor to win.

If you haven’t worked through our intermediate LBO tutorial yet, that’s a great place to start.

We also have a comprehensive (and free!) private equity modeling course.